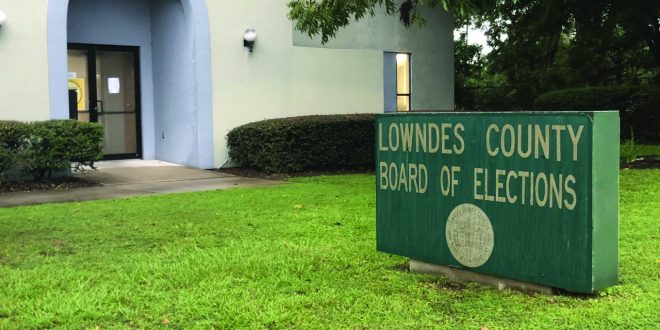 A Look into Lowndes County Ballot

The presidential candidates aren’t the only people running this November. The Public Service Commissioners for Lowndes County will also be held with Republican candidate Jason Shaw and Democratic candidate Robert Bryant.

According to the State of Georgia’s Public Service Commission, the role of a public service commissioner is deciding reasonable rates of utilities for Georgia citizens. The main utilities include electric, gas and telecommunications.

Utilities affect everyone, especially those that pay for them. College is expensive as is, and , Republican nominee and current Public Service Commissioner for District One, Jason Shaw, recognizes that low energy costs are important to the student body.

“We are in charge of striking that balance between protecting, obviously the consumers, but also working with the utilities to make sure they have resources they need to provide reliable services that we expect,” Shaw said. “Since I’ve been on the commission, I’ve been fighting to keep our utility rates as low as possible.”

Robert Bryant, Democratic nominee for public service commissioner, also plans to fight for a decrease in utility rates. According to Bryant, Georgia is seeing an increase in utility rates.
“My opponent has voted four times in the last two years, or more, to raise the light bills, so students going to work for places, especially in Georgia, you want to have somebody at the table who will say ‘no’ to a rate increase unless it benefits the consumer,” Bryant said.

According to Bryant, students want to pay attention to who are placed in leadership roles. Bryant’s goals as PSC include looking at more efficient ways to produce power, broadband, and communications in Georgia.

Bryant recognizes the difficulties students have when learning in rural areas and the need for better resources.

“A number of our students and educators are having a hard time learning online because they don’t have infrastructure or access to broadband internet,” Bryant said. “Here in Chatham County, for example, there are places where they have a bus that has to sit in a parking lot, so students can just do their basic learning.”

According to Shaw, broadband internet is very important to the student body.

“Expanding broadband is an important factor in bringing new jobs and investment into rural Georgia,” Shaw said. “Our energy rates are below the national average, right now, they are estimated to be around 15% lower than the national average and that includes everyone in the state.”

Shaw said he has been working to increase Georgia’s renewable energy alternatives.

“We’ve added a lot of new solar to the Georgia power system,” Shaw said. “Basically, we are doubling the amount of solar in the next three to four years.”

Bryant said the issue with the use of fossil fuel is that they are not cos- efficient and lead to public health issues.

Bryant, if elected, plans to partner with the University System of Georgia to further research concerning solar power.

“I believe that by partnering with the University System of Georgia, places like Valdosta State, saying you have some of the best researchers in the state,” Bryant said, “Let’s do some research around what it means to do solar energy and let’s do research around how we can do different ways of producing communication in Georgia and using technology to do that will help Georgia move forward.”

COVID has caused major adjustments to the university community. Student health is in the hands of the administration.

“I have a lot of confidence and trust in their decision-making process, and I know they are doing a lot to make sure all the safety guidelines are being met,” Shaw said. “I’m from South Georgia and I live in Lowndes County, so Valdosta State is near and dear to my heart. We have a lot of parts of Lowndes County and all of rural Georgia that do not have broadband internet, so that’s something we are working really hard on.”

Bryant recognizes the struggle behind having to make decisions regarding COVID and the importance of not only a student’s budget, but their health.

“It’s a tough situation to navigate,” Bryant said. I sympathize with both students and administrators and every campus should take a hard look at what makes sense for that campus community.”