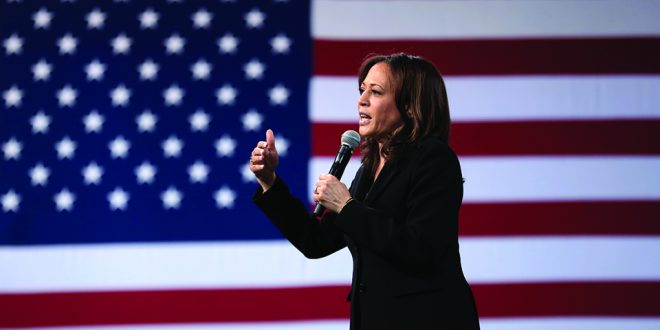 Kamala Harris is a United States Senator of California serving on the Homeland Security and Governmental Affairs Committee, Select Committee on Intelligence, Committee on the Judiciary and the Committee on the Budget. From 2004 to 2011, Harris was the San Francisco district attorney and afterwards became the California attorney general from 2011 to 2017.
According to her website, harris.sentate.gov, “Kamala has spent her life fighting injustice.”

According to The New York Times, “Ms. Harris has been a vocal supporter of racial justice legislation in response to the killing of Mr. (George) Floyd, supporting proposals to overhaul policing and make lynching a federal crime.”

Many people from the Black American community saw her as a racial advocate during the beginning of the presidential race as she had spoken up on racial injustices in her previous debates.
Harris went against Biden during the first Democratic Presidential Debate on NBC News and brought up his past work with segregationists.

“It was hurtful to hear you talk about the reputations of two United states senators who built their reputations and career on segregation of race in this country,” Harris said. “And it was not only that, but you worked with them to oppose bussing.”

Due to media bringing up her prosecution work as the California attorney general, she quickly lost that support and dropped out of the race.

According to The Appeal, “In 2015, when called upon by the Legislative Black Caucus to support bills that would have mandated that all police officers wear body worn cameras and that the Attorney General’s office investigate lethal officer-involved shootings, she declined.”

Along with this, Harris proposed a law that threatened jail time for the parents of chronically truant children. When asked if marijuana should be legal, she began to laugh, not helping her case already being criticized for assisting in charging many San Francisco residents with marijuana charges.

On June 8, 2019 Harris spoke at the Alabama Democratic Conference convention in Montgomery, AL addressing those actions.

“I made the state law enforcement agency under my supervision wear body cameras to increase accountability to the community,” Harris said, according to The Washington Post. “I launched investigations into acts of discrimination by law enforcement agencies. All because the people deserved justice.”

Senator Harris did not speak on her opposition of the bill that would have required the attorney general’s office to investigate police shootings.

After being nominated as democratic vice president, she tweeted about Biden being able to bring people together.

“@JoeBiden can unify the American people because he’s spent his life fighting for us,” Harris said. “And as president, he’ll build an America that lives up to our ideals. I’m honored to join him as our party’s nominee for Vice President, and do what it takes to make him our Commander-in-Chief.”

Senator Kamala Harris could be the first Black woman nominated into national office as a vice president.