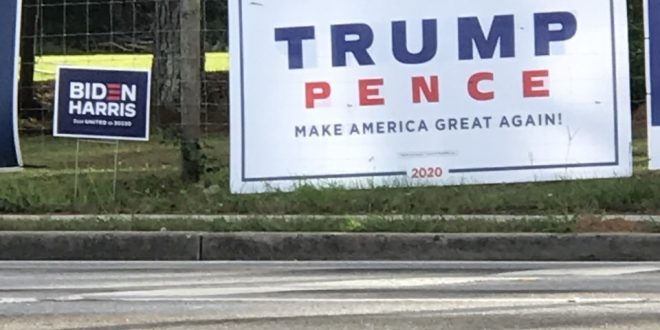 Senior health science major Erin Golden recalls a time when her political affiliation almost came between her and a friend. Golden identifies as a Democrat but learned soon after that those she befriended didn’t always share her same interests and beliefs.

Golden was put in an awkward situation when she learned from social media that her friend was a Republican and had differing views that she felt strongly about. After sitting down with her friend and talking about their different political views, Golden realized that she couldn’t change her friend’s beliefs and her friend could not force her own beliefs onto her.

There are a lot of issues people don’t agree on in this world, but politics seems to be one of the most controversial, especially in this day in age. The election has been fueled by racial unrest, the ongoing pandemic and general human right issues. Because of differing views some people find it hard to associate with one another which creates negative tension between the political party.

Dr. James LaPlant, dean of the College of Humanities and Social Sciences, said that social media has had a huge influence on the negative stereotypes attached to each political party.

“We are deeply polarized in this nation and much of our media consumption is in an echo chamber where our political views are simply reinforced,” he said. ” This polarization impacts our circle of friends and our social media habits.”

These negative stereotypes have been around for decades but have become more visible in the past decade because of the increase in issues such as racial injustice and the pandemic.

“There is no shortage of stereotypes of the political parties which have existed for decades,” Dr. LaPlant said.  “The one thing that is clear over the last several decades is that both political parties have become more ideologically cohesive over the last several decades which only feeds our polarization.  Conservative Democrats are vanishing and what we once called “Liberal Republicans” have gone extinct.”

These negative stereotypes are what cause people like Lydia Yawn, junior English major to divert from being associated with someone in a different political group.

“Since I’m a part of the LGBTQ community, I don’t really like being friends with people who have differing views and I understand that our views can be different but if you’re a Trump supporter I would take it as you don’t like me and you don’t support me and I don’t feel comfortable being friends with that,” she said.

Studies prove that people rely on stereotypes because they save people time and energy. In this instance, it’s easier for people to avoid associating with someone who has different views than to discover why they believe what they do and agree to disagree.

Dr.LaPlant encourages students to associate with someone with differing views so that everyone can learn how to come together as a nation.

“We actually need more interactions of Americans on opposite sides of the political fence,” he said.   “Unfortunately, we are increasingly retreating into groupings of like-minded citizens, but I remain hopeful and optimistic that we can foster conversations.”

It’s clear that the outcome of this election will determine how Americans coexist. The question is will they be able to communicate across party lines?

“It would foolish of us to think that polarization will vanish or even substantially diminish in the wake of the 2020 election, Dr. LaPlant said.  “Trump’s strategy has been clear that he will campaign and govern almost exclusively to his base. “It is hard to imagine how a second term for Trump closes the growing political divide in this nation or dampens polarization.  There is more hope that a Biden presidency could diminish polarization, and bring more Americans together across the political divide, but a potential President Biden might find he is more of a captive of polarization than a change agent.”

Previous Fearmongering and the 2020 Election
Next Editorial: Political Parties Need to Focus on Bipartisanship to Reach a Compromise

On March 1, Business Bites has reopened with a new name, Blazin’ Café, in Pound ...