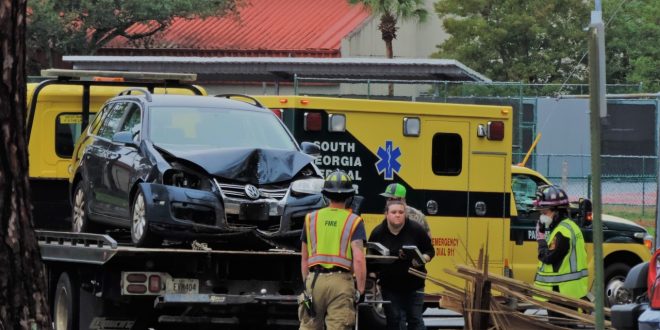 Fire fighters arrive at a car crash that resulted in a broken street pole late Wednesday afternoon on Jan. 27. The crash slowed traffic down for a period of time. 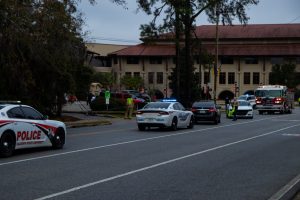 Mary Morton, a junior ASL deaf education major, said she was the first to call 9-1-1.

“I was sitting in the Student Union when I was looking out the window and I saw two black cars collide,” Morton said.
Morton witnessed the whole car accident and said she was shocked to have seen such an accident occur.
“A small vehicle—it was like a Lexus ran into the larger black van from behind and caused the black van to go into the light pole, and the light pole completely collapsed. I thought it hit one of the cars in the parking lot next to it on Baytree, but it didn’t,” she said. “I was in such a frantic state, I was the only one who called 9-1-1, and I didn’t see anyone else stopping to help.”

The car that struck the pole was actually a Volkswagen. It was struck by a Nissan Sentra sedan.
Officer Rebecca Leatherberry, operations supervisor of VSUPD, said VSUPD responded to the scene, but offered no further details.
“Because the accident occurred on the city street, the Valdosta Police Department took the report,” she said. “One of our officers responded due to the proximity to campus, but they did not do a report.”
An ambulance was called to the scene but was not required as witnesses didn’t recall any suspect being taken to the hospital.
This story will be updated if there are any updates about the accident.