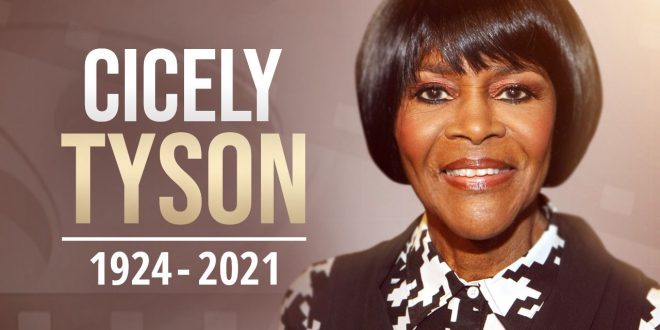 Cicely Tyson, an acting legend for more than 70 years, died on Jan. 28. Her talents helped her to win awards, land stellar roles and be inducted into three difference Halls of Fame.

Born on Dec. 19, 1924, from Caribbean immigrants in Harlem, N.Y., Tyson grew up in a religious atmosphere.

At the age of 17, Tyson had a daughter whose father remains undercover.

In 1942, Tyson married Kenneth Franklin, who later abandoned her after less than eighteen months of marriage. It wasn’t until 1956 when the two were legally divorced.

Tyson worked a typing job as a single mother at the age of 18, until she was discovered by a photographer for Ebony magazine and started a successful career in fashion modeling.

With the modeling opportunity, came her first acting role, Tony, on the NBC television series “Frontiers of Faith” in 1951.

Tyson’s first stage appearance was the role of Barbara Allen in Vinnette Carroll’s musical, “Dark of the Moon,” that played at the Harlem YMCA in 1958.

This stage appearance helped Tyson to appear in the original cast of “The Blacks” from French playwright Jean Genet in the 1960s.

“The Blacks” ran for 1,408 performances, making it the longest running off-Broadway non-musical of the decade.

Tyson went on to receive the 1961-1962 Vernon Rice Award for her performance in the off-Broadway show “Moon on a Rainbow Shawl.”

Producer David Susskind spotted Tyson in “The Blacks” and cast her for a role in “East Side/West Side” where she played the secretary of a social worker. She was also the only reoccurring African American cast on the show.

Tyson’s mother, Fredericka Tyson, was opposed to Cicely becoming an actress and stopped speaking to her for some time. Her mother kicked her out of the house, until she saw Cicely perform on stage.

In 1972, Tyson was nominated for the Academy Award and Golden Globe Award for Best Actress for her role as Rebecca Morgan in the film “Sounder.”

She also won the National Society of Film Critics and National Board of Review awards for Best Actress.

Two years later, one of Tyson’s well-known television film features, “The Autobiography of Miss Jane Pittman,” won her a Primetime Emmy Award for Outstanding Lead Actress – Miniseries or a Movie and an Emmy Award for Actress of the Year – Special.

In this, Tyson portrays a black woman who lives life from slavery until her death, right before the civil rights movement.

Tyson was remarried in 1981 to jazz trumpeter Miles Davis at the home of Bill Cosby. They lived together in Malibu, CA. In 1988, Tyson filed for divorce, and it wasn’t until 1989 that the divorce was finalized.

As for her education, Tyson received honorary degrees from Clark Atlanta University, Columbia University, Howard University and Morehouse College, which is known as an all-male historically black college.

She was an honorary member of the Delta Sigma Theta sorority in college as well.

The Cicely Tyson School of Performing and Fine Arts in East Orange, New Jersey was named after Tyson in 2009.

“It’s like carrying a child and giving birth,” Tyson said about the unveiling of the Fine Arts school. “The birth date is October 24.”

During one of her final interviews, Tyson met with her friend, Gayle King, on “CBS This Morning” to discuss her past roles, her memoir and even her dating life.
“I’ve done my best,” Tyson said after King asked how she wants to be remembered. “That’s all.”