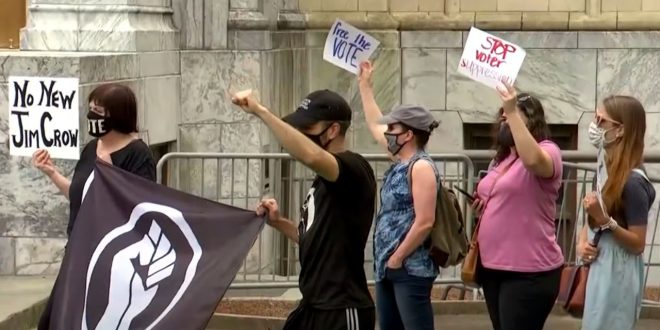 A new law aimed at reforming the election process in Georgia has brought much attention to the peach state.

The law, signed by Governor Brian Kemp and formally known as the Election Integrity Act of 2021, takes precise measures to overhaul voting requirements and procedures.

One of the features of the law that is not as much of a structural change, but has generated controversy, is the provision that prohibits volunteers from giving away drinks and snacks to voters waiting in lines.

Supporters of the law justify the provision by claiming that voting line giveaways such as food and drinks violate the protections that Georgia has placed on campaigning near a polling location or voting line.

However, critics view the food and water restriction, as well as the absentee ID requirement, as a move that targets black voters.

Georgia native producer Tyler Perry said the law is “unconstitutional” and “harkens to the Jim-Crow era.”

Dr. James LaPlant, Dean of the College of Humanities and Social Sciences and professor of political science raised another potential concern of the law.

“One of the lesser-talked about changes that this law makes is that it allows the state to exercise more authority over local elections,” Dr. LaPlant said.

Dr. LaPlant pointed to the state’s ability to issue unlimited challenges in regard to elections, hinting towards the provision that allows the state to take control of local election systems that are determined to be “underperforming.”

Additionally, Georgia-based corporations such as Coca-Cola and Delta were vocal about their opposition to the law, alleging that it suppresses voters of color.

The passing of the election law also resulted in the MLB pulling its 2021 All-Star game from Atlanta Brave’s stadium, Truist Park, after President Biden said he would “strongly support” the All-Star game’s relocation.

“The move doesn’t really surprise me,” LaPlant said. “It’s consistent with what other leagues have done, such as when the NBA moved its All-Star weekend out of Charlotte, North Carolina, after there was controversy surrounding a transgender bathroom bill that was passed.”

The new law is slated to go into effect on July 1.