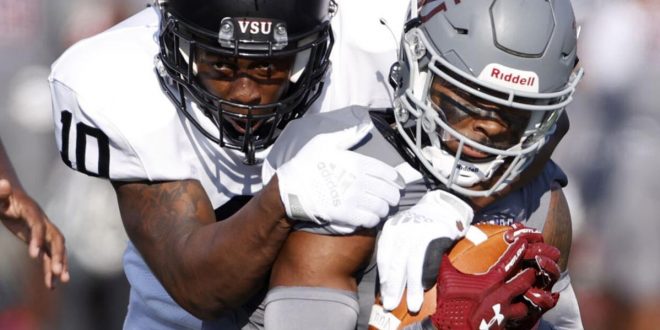 No. 6 VSU conquered Virginia Union 51-7 on the road with 559 yards of total offense and seven touchdowns.

Quarterback Ivory Durham passed for 252 yards, while he and running backs Seth Mcgill and Jamar Thompkins combined for 307 rushing yards.

The VSU defense finished with another dominant performance.

Gulf South Conference Defensive Player of the Week Mondrell Jefferson was flying sideline to sideline picking up one fumble and one interception.

Redshirt Senior Nick Moss led the team in tackles with 14 and recorded a fumble recovery.

Virginia Union’s passing game was put on lockdown as quarterback Khalid Morris was only able to put up 97 passing yards, but their ground game was more effective with 177 yards rushing.

After a few fruitless drives from both teams, VSU’s offense found its rhythm and put points on the board.

VSU special teams recovered a fumble lost by Virginia Union wideout Jaiden Reavis, and it set VSU up with a first and goal situation.

Durham found wideout Brian Saunds for a six-yard gain, and the drive was capped off with a one-yard touchdown run by Jamar Thompkins.

Virginia Union was moving the ball with the run game, but then a pass was intercepted by VSU defensive back Mondrell Jefferson.

Mcgill opened up the new drive with a 50-yard rushing touchdown to put VSU up 14-0.

After a 39-yard touchdown rush from Durham, some excellent rushing from Mcgill and Thompkins and a one-yard passing touchdown from Durham to wideout Victor Talley, VSU was up 27-0 at the half.

In the second half, nothing slowed down for VSU’s offense.

Estin Thiele connected on 37-yard field goal, Durham scored on a 59-yard rushing touchdown and connected with Saunds on a seven-yard passing touchdown, and running back James Chaney ran for a 12-yard score with 38 seconds left on the clock.

Virginia Union had a 13-play drive to start the fourth quarter. The drive ended with a three-yard rushing touchdown from running back Jada Byers.

This was Virginia Union’s only score of the game.