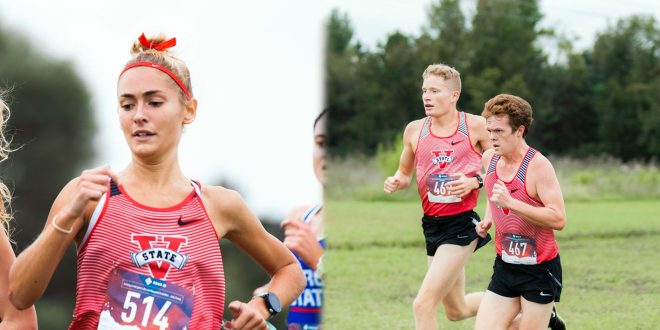 The men are ranked in the top 10 in the region for the first time since 2014. All seven boys who ran finished with personal bests.

Junior Brishen House led the way for the men’s team.

House finished 34th overall with a time of 33:27.3, which is the second fasted time ever at VSU.

Both Kraus and Flatt finished with times that rank in the top 10 all-time at VSU with the seventh and ninth best respectively.

The Lady Blazers were led by Angie Cipriani, who finished in the top 20, solidifying her a spot on the All-Region second team.

The region championships were the last meet of the season for the Blazers, but head coach Todd Smoot is already looking forward to next year.

“Ending the year in the top 10 Regionally is positive for the men—a result not accomplished since 2014—to end the season in the top 10,” he said. “Earning ninth position in the South Region Championship race validates their drive, dedication, determination, commitment and accountability to each other.”

The Blazer men will be returning five of their top seven and will use the momentum from this race to enter next season with higher goals.

The Lady Blazers will be returning five runners for next year, however the loss of Cipriani and Johnson will pose a challenge for the Lady Blazers next season.

“Losing two strong women in Angie and Leah will affect the team . . . Samantha has been in a leadership role for two years and will be strong for the team,” Smoot said.

In all, the Blazers finished the season on a high note and will look to use their experience as a team to come back strong next season, even without the leadership of a few key runners.

Smoot is confident that the new leaders will step up and take charge.

“The leadership of Samantha, Ky and Jaycie will help set the tone for the team,” Smoot said. “The ultimate goal of creating a group of young women and men who have their focus forward, helping to keep everyone accountable, pushing the person in front of you and pulling the person behind you to greater levels is nearing. This is more than a team—it is family.”

Previous The new groundhog: Noodle the pug
Next People Poll: What did you do for Halloween?