Blazer Week Kickoff started their events on Monday, and from 5-8 p.m., CAB held festivities on the front lawn that included axe throwing, food trucks and games.

Because of the storm that blew through Valdosta last week, Tuesday’s Amazing Race event was cancelled. Wednesday’s Screen on the Green was also cancelled, which was scheduled to air “Spiderman: No Way Home” on the front lawn.

However, Screen on the Green has been rescheduled for Wednesday, April 13, at 6:30 p.m. so people can still see Spiderman: No way Home! if you haven’t had the chance.

The Amazing Race event will not be rescheduled.

On Thursday, a Silent Disco was held in the Student Union. Students were given headphones with different channels that corresponded to the three DJs. The channel that the student was listening to was indicated by the color of their headphone lights. 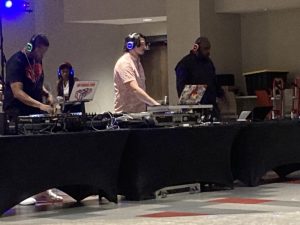 Groups of friends listened to the same channels together, and when they noticed another group singing a popular song from a different channel, they hurried to switch to that channel.

Wright said that she had heard about them, and they seemed interesting. She rated all three DJs a 10/10. 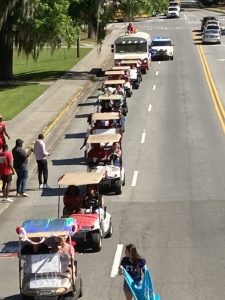 Around 20 organizations decorated and drove a golf cart around campus in the golf parade. Students walking with the parade handed out candy to cars and people along the way.

Davion Hasecuster, a senior mass media major, was there to watch the parade. He was there in support of the honors association, which he is a member.

Rhonda Dowdy was there to support her daughter, Michele Dowdy, a senior environmental geoscience major and member of Fire Pit, who was atop the Blazer bus throwing t-shirts.

Rhonda Dowdy was disappointed that more people didn’t show up to watch the parade. She said that the event was not properly advertised.

Hasecuster credited the low attendance to the fact that it was Friday but said that students should support organizations more.

The Spring football game started after the golf cart parade where the Red and Black teams came to a 24-24 draw.

Previous People Poll: How Do You Feel About the “Don’t Say Gay” Bill, and Do You Think Georgia Will Adopt This Bill?
Next “It’s time. See you on the other side.”: ‘Stranger Things’ returns for fourth season