Home / Entertainment / “It’s time. See you on the other side.”: ‘Stranger Things’ returns for fourth season 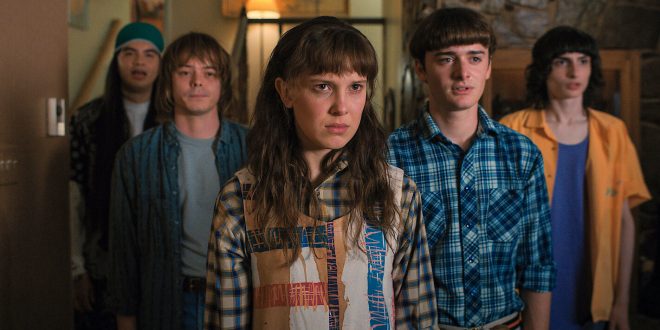 “It’s time. See you on the other side.”: ‘Stranger Things’ returns for fourth season

“Stranger Things” trailer had dropped on April 12 announcing that it will be returning for another season after a three year wait.

After season three, the group has left Hawkins and traveled as far away in order to get away from whatever curse the town has on itself. Abandoning Hopper, Hawkins, and the friends that have been killed as a result of these incidents, Joyce, Will, Joyce and Jonathan have all escaped to California.

However, the other world isn’t quite done with them yet, as they’re quickly contacted by their Hawkins friends who have more reports of strange occurrences.

The big bad of the season seems to be a mockery of the Mind Flayer from season three, having elongated arms that extend far away from itself, but being backlit with the same lightning that the Mind Flayer had.

This, an image of the Demogorgon, and the introduction late in the trailer of another villain who seems, surprisingly, humanoid. It sports a terrible malformation and hideous scarring around their eyes, and the voice is practically unrecognizable.

The trailer also has a haunting rendition of Journey’s “Separate Ways” track, covered and worked into the trailer to create a terrifyingly immersive atmosphere. You’re pulled right back into the 80’s, where guitar riffs, loud music and larger than life characters rule the world.

Shots of Dungeons and Dragons are showed, inviting the audience into another round of good versus evil with Eleven, and the monstrosities created by The Upside Down.

Other scenes in this trailer include the return of “Mad” Max from season three, sitting at her older brother’s grave and explaining to him what’s been happening since the departure of Joyce and her family. Everyone has tried their best to adjust to a normal life despite the horrors they have witnessed, but something is impeding their process.

Sadly, Eleven is seen in this trailer explaining that she no longer has her abilities and cannot use them to protect her friends as a result. There are clips displaying Hopper fending off an adult Demogorgon for what looked like the Russians.

Steve fighting with no shirt trying to defend against these creatures as well. If season three was the best season yet, the fourth is going to attempt surpassing all expectations.

The Duffer brothers have gone all out and put in every effort to make the next season the best that it can be. The brothers have been on record saying that this season will be like “A

Nightmare on Elm Street” and seeing as the Upside Down is inspired by “Silent Hill,” Otherworld, this is no surprise to fans of the series.

Then, there’s the eerie Grandfather clock that originated from the Creel residence, seen in a different teaser for Season four. This clock is seen literally conjoined with the walls of the Hawkins middle school, oozing black sludge.

This clock is familiar to fans, as it was one of the items seen in a previous teaser in September.

Is the Upside Down connecting itself to The Creel household? Why are the Russians fighting Demogorgons? Are Jane’s powers going to return? And just what is that thing at the end of the trailer? Could it be Billy? Or someone else entirely?

The first half of episodes will release on May 27. Not long to wait now until everyone returns to Hawkins.