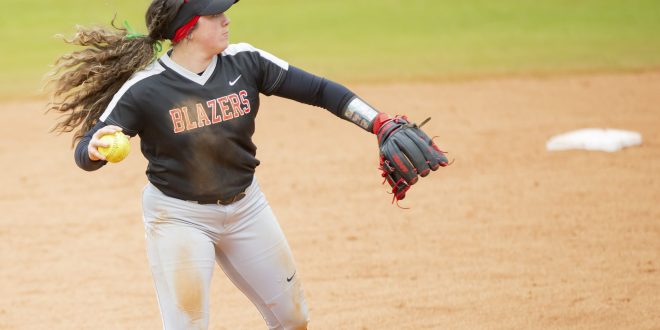 In the sweep against the Lady Wolves, two of the three games were run-ruled as VSU outscored West Georgia 32-12 over the course of the series.

Game one of Saturday’s doubleheader featured the Lady Blazers having to fend off a late West Georgia rally to secure the victory.

Senior shortstop, Nicole Pennington, got the scoring started for the Lady Blazers in the top of the first inning with a pop fly to centerfield. That allowed graduate third basewoman, Ally Clegg, to reach third and brought home sophomore right fielder, Morgan Hill.

Sophomore designated player, Katie Proctor, put VSU up 2-0 with a single to left field. The single helped get Clegg home.

The next scoring burst from either team wouldn’t come until the fourth inning when junior catcher, Taylor Lewis, brought in sophomore pinch runner, Kayla Tosone, with a single to right field.

West Georgia answered back in the bottom half of the inning as Emma Bailey homered to center field.

The scoring continued throughout the fifth inning as the Lady Blazers built a 6-1 lead thanks to Proctor’s two-run homer to left field. However, the Lady Wolves were able to claw their way back into the game, scoring four runs to make it 6-5 heading into the seventh inning.

With the Lady Blazers going hitless in the top half of the seventh, it was up to junior pitcher, Samantha Richards, to close out the game. Richards delivered, striking out the final two batters to win the game.

While game two of the series ultimately ended in a run-rule, the Lady Blazers found themselves down early on.

Following Lewis’ home run to open up the scoring in the second inning was quickly answered with a two-run home run and solo home run from West Georgia.

The Lady Blazers’ offense then went supernova in the third inning as eight runners scored. Both Clegg and Pennington smacked home runs to give VSU a 4-3 advantage.

Both Hill and Everson would find home when Clegg doubled to left field. Sophomore first basewoman, Aniston Gano, rounded out the scoring run by bringing in Clegg with a single to left center as the Lady Blazers went up 9-3.

The Lady Wolves trimmed into the lead with a three-run homer by R.J. Janke in the fourth inning. However, the Lady Blazers had another huge run burst in the top of the fifth to shut down any chance of a comeback.

The burst was sparked by Hill’s two-run homer that also brought in Meadows. Over the course of the inning, Clegg, Gano and Pennington all also reached home plate to help put away the Lady Wolves.

Game three proved to be a memorable one for Richards, who recorded her 500th career strikeout during the game. For the game, Richards struck out 13 batters, giving up just three hits and one run.

That one and only run came in the second inning when West Georgia’s Jacie Arrington sent one flying over left center field.

From there, though, it was all VSU.

Macera’s daring steal for home plate in the third inning proved to pay off as she scored VSU’s first run of the game. Clegg tacked on to the score with a two-run homer to left center field. The home run was Clegg’s tenth of the season.

The Lady Blazers continued to pour it on with an eight-run fourth inning with the team batting around to seize control of the game.

Proctor started and finished the inning’s scoring with singles to left field, bringing in Pennington both times. In addition to those runs, Macera, Hill, and Pennington also brought in runs. The Lady Blazers’ offense was effective, needing just six hits to score the eight runs.

Meadows scored the final run of the game, reaching home off of Hill’s ground out to first base.

With the series behind them, VSU now turns their attention to a highly anticipated top ten showdown against No. 6 Auburn Montgomery (30-6, 18-3 GSC). This three-game series will take place on April 15-16 at the VSU Softball Complex and is also the Lady Blazers’ final home conference series of the season.

Previous “It’s time. See you on the other side.”: ‘Stranger Things’ returns for fourth season
Next Nineteenth Amendment a focus at Odum book discussion