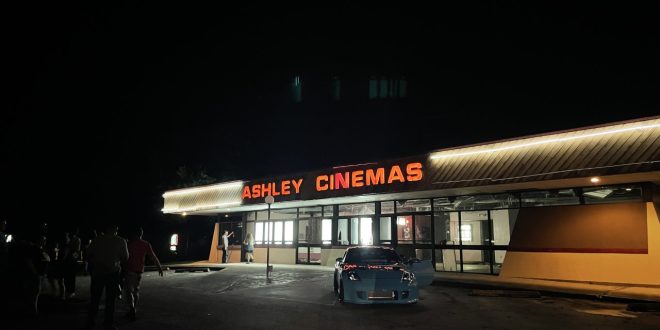 On July 22, VSU posted to Facebook stating that Ashley Cinemas would be lit up for the last time on July 23 and July 24 so the community could have a final farewell before demolition begins.

The red and white lights shined bright on the dark parking lot pavement as movie-goers from Ashley Cinemas’ past sat and reminisced on good times and cheaper prices.

Many onlookers sat in their cars and played old music, while some people brought their own lawn chairs and talked amongst the crowd. Some even brought old cars to get photos in front of the theater to have that “old timey” effect on the photos. 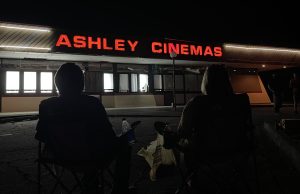 “It was the place to be,” Jenny Jolly said. “It was a great place to come and hang out with your friends whether you were in the parking lot or inside playing games.”

Many onlookers were brokenhearted because the memories they had of the theater were going to be torn down before they knew it.

Ashley Cinemas opened in 1979 and started with only four screens and as the theater’s popularity grew, four more screens were added. Prices started at $0.99 on the weekdays and $1.99 on the weekends. With the switch from film to digital, prices went up, causing $1.99 movies to go to $2.50. 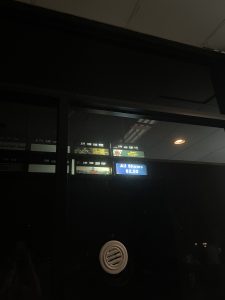 VSU purchased the theater in 2012 and it stayed open for two years. But once the digital movies became too expensive to show, the theater closed in 2014 and has been vacant since.

The theater is set to be torn down soon and the school will begin construction for the upcoming performing arts center that is projected to be finished by late 2023.

“Structurally, the theater would cost more to keep it up and fix than it would be to tear it down and make it brand new,” Paul Leavy, university photographer said.

The theater is currently closed off to the public and has chain-link fencing around it, but people can still see the theater from the road if they missed the final light up.