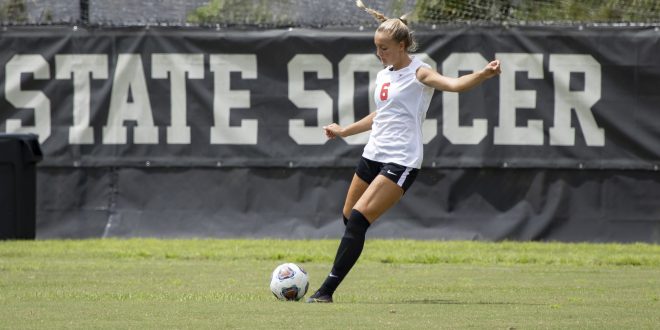 While the players were hard at work in the weight room, Coach Steven Andrew drew up new formations and special plays.

“Montevallo is a great team,” Andrew said. “Any time that we play against them, it is a very close game. But I know that if they play their best, they may very well come out with a good win.”

Andrew said that the season was a frustrating one. However, he did not let that get him, nor his team, down.

Andrew also said he has worked hard to hone the possession and defensive skills of his players.

The coach wants the two remaining games to be about honoring the senior players rather than winning. Seven seniors will graduate at the end of the year.

“Yes, we’d love to win; it is a good goal,” he said. “I want them to use the skills that we’ve been working on and send them out with a great win.”

Sophomore forward Jocelyn Oballe expressed her confidence in her teammates, declaring that they are stronger when they play for one goal.

“We aren’t intimidated by any team,” Oballe said. “I know that if we play as we usually do, we will leave the field with the result that we want.”

Sophomore defender Asti Luff said that with the right mindset, the team will reach their best potential.

The players enjoy spending time with each other.

“We’re honestly a really goofy group of people,” Oballe said. “We all care for each other a lot, and our team is like a family.”

The Lady Blazers’ true goofiness was unearthed when Luff recounted multiple tales of team traditions. One custom she shared was that she and her teammates love to get into a “hype circle” and listen to “I Swag Surfin’,” written by artist Fast Life Yungstaz.

“We also pray before every game,” she said. “I really like it.”

While goodbyes may be bittersweet, the team is ready to send off their seniors in the best way: with a fantastic victory over Montevallo.