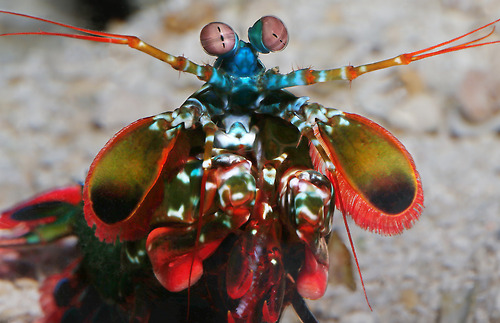 Inspired by the Mantis shrimp ability to see cancer, scientists have created a camera the can do the same.

Scientists from the University of Queensland in Australia have recently discovered that the mantis shrimp has a ridiculously incredible ability—these sea creatures are able to detect a variety of cancers inside the human body. Scientists at the institution have replicated the species ability in a camera and are hoping to eventually put it into a smartphone.

The Mantis shrimp is able to see cancer and the activity of our neurons. This is all possible because of its very unique eyes, known as compound eyes. These particular kinds of eyes are so splendidly tuned to sense polarized light— light that reflects differently off different kinds of tissues—including cancerous or healthy tissue.

“We see colour with hues and shades, and objects that contrast—a red apple in a green tree for example—but our research is revealing a number of animals use polarized light to detect and discriminate between objects,” said Justin Marshall from the Queensland Brain Institute at the University of Queensland during a press release.

His team has diligently worked with international collaborations to produce such a camera capable of replicating the shrimp’s ability. Their hopes are that one day in the near future people will be able to scan their own bodies for cancer at home.

For more information on how the team conducted its experiments please visit;

Previous Why women choose not to marry
Next Daily Strange: New Yorkers Take A Bite

Have you ever noticed that every month has one of those national *whatever* days that ...